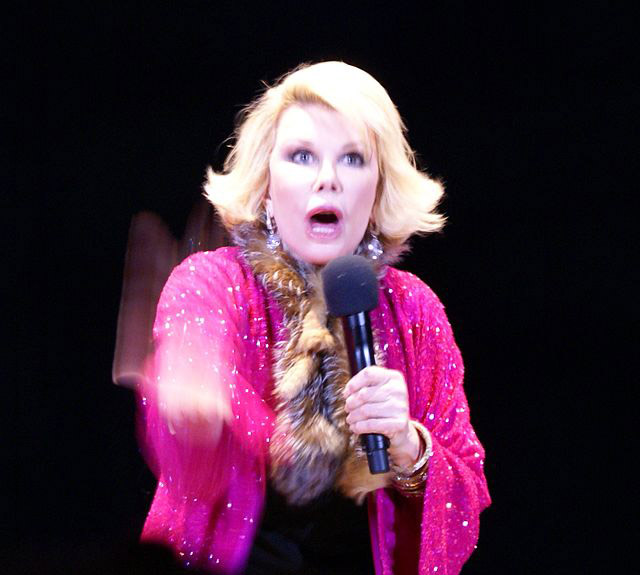 Joan Rivers was a remarkable comedian, known for her acerbic wit and blunt honesty.

Many saw her stand-up routines or watched her E! TV show, Fashion Police… but Rivers, who died 4 September at 81, was a complicated, vivacious woman with a storied past. Here are a few things about her that you may not know:

1. Joan Rivers wasn’t her given name: The comedian was born Joan Molinsky, but at the order of her agent, Tony Rivers, she adopted a stage name. On a whim, she chose “Joan Rivers,” just because it felt right.

“Having a stage name made it easier to perform in those raunchy nightclubs,” she told the Evening News newspaper in 1986. “Joan Rivers was like a party dress I put on, so in those early days, she was only the tiniest part of me and Joan Molinsky was still frightened and confused and bewildered in her life.”

2. Bill Cosby was responsible for her big break: At first, Rivers became famous for being a guest host on Johnny Carson’s Tonight Show.

“The night before I went on Carson, a comic bombed and Bill Cosby – who was white hot at that moment – he had seen me in the Village and he said to them, ‘You might as well use Joan. She can’t be any worse than the guy you had on last night!'” she told Entertainment Weekly. “I was brought on in the last 10 minutes of the show — the worst slot. And God bless Johnny Carson, he said right there on the air, ‘You’re going to be a big star.'” He was right. 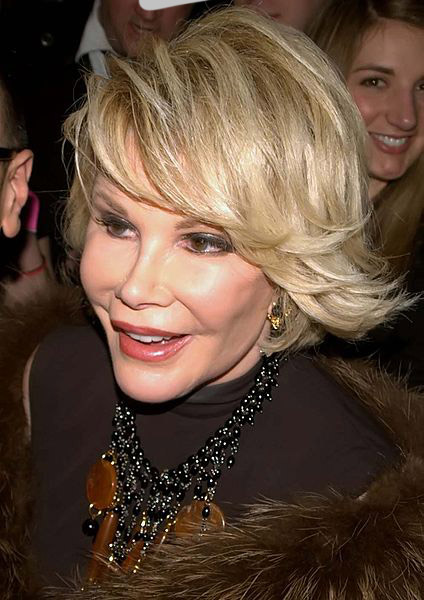 3. She was open about everything, even plastic surgery: “I just hosted the Miss USA Pageant and, let me tell you, beautiful gets you everywhere. The New York Times had an article maybe six months ago: Babies respond to pretty faces. So stop telling everyone it’s OK not to be pretty! If you can fix it, fix it!” she told Entertainment Weekly in 2010.

“If it makes you happier. I love to look in the mirror and say, ‘For 77, you look good.’ That’s all. I don’t care what anyone says. Not bad for 77.” However, it wasn’t always easy. In a clip from her reality TV series with her daughter Melissa, Rivers was captured by cameras crying before going into surgery. “Oh God, what a s*** business this is,” she said. “You have to look good.”

4. She was a huge animal lover: After her husband committed suicide in 1987, she too considered ending her life. However, she was saved by her dog, Spike.

“I was sitting in this big empty house in Bel Air, with a phone with five extensions which we no longer needed. I had the gun in my lap, and the dog sat on the gun. I lecture on suicide because things turn around,” she told the Daily Beast. “I tell people this is a horrible, awful dark moment, but it will change and you must know it’s going to change and you push forward. I look back and think, ‘Life is great, life goes on. It changes.'” As she got older, she made sure to set aside money for her pets when she made her will.

5. Joan Rivers outlined her funeral wishes in her book I Hate Everyone…Starting With Me:

“When I die (and yes, Melissa, that day will come; and yes, Melissa, everything’s in your name), I want my funeral to be a huge showbiz affair with lights, cameras, action…I want Craft services, I want paparazzi and I want publicists making a scene! I want it to be Hollywood all the way. I don’t want some rabbi rambling on; I want Meryl Streep crying, in five different accents. I don’t want a eulogy; I want Bobby Vinton to pick up my head and sing ‘Mr. Lonley.’ I want to look gorgeous, better dead than I do alive. I want to be buried in a Valentino gown and I want Harry Winston to make me a toe tag. And I want a wind machine so that even in the casket my hair is blowing just like Beyonce’s.”