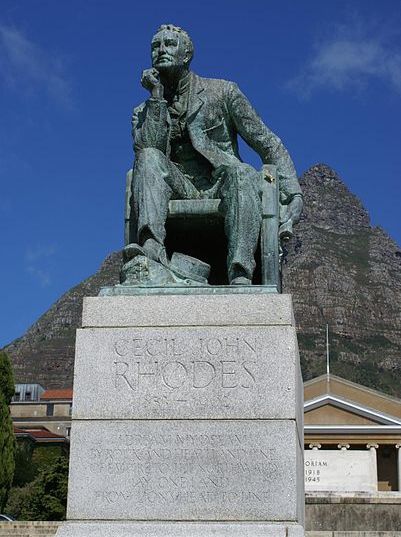 When he died, Cecil John Rhodes left some of his enormous wealth to found a prestigious scholarship. Part of his sprawling estate was given over to the establishment of the University of Cape Town and another part to the Kirstenbosch Botanical Gardens, a less controversial but more beautiful legacy.

In recent years (in fact it was a question that arose when I visited UCT last year to give a lecture), the presence of a statue of Rhodes has become the focus of a vitriolic campaign against what certain people believe is an offensive monument to a wicked Imperialist who exploited Africans. The latter is obviously true, but then so was the story of King Shaka of the Zulu – who actually killed (sometimes by his own hand) so many Africans that he created anew the map of Eastern South Africa – chasing the Xhosa south and the Swazi north, bringing the disparate Zulu clans under his iron rule.

I like the fact that King Shaka has an airport named after him. That doesn’t mean I have to like King Shaka. Cecil John Rhodes may have been the most successful imperialist agent of Victorian Britain, but his contribution to history (let alone education) is unquestionable.

Take the Rhodes statue down, I don’t care. I don’t have a dog in that fight. I’m not a fan of Rhodes and I don’t doubt his politics were appalling. As a student of history, it offends me more to see any modern human being let their feelings (however genuine and serious) attempt to cleanse bloody, ugly history of its veracity. I felt the same when they pulled down Saddam’s statue and when they removed Stalin’s body from Red Square. You can’t change the present by whitewashing the past – it’s like a child putting a plaster on a wound.

It is a hollow victory to defeat those already dead. Rhodes doesn’t care; the French monarchs whose tombs were desecrated by revolutionaries didn’t care and the bones of dead people in unmarked graves are no more troubled by the events of the present than the revered bones of saints. Those doing the desecration however, seldom end up making history themselves. The only way to beat a bad person is to leave your own legacy which makes their legacy look bad.

People are a product of the time in which they live. We can’t judge a person who died a hundred years ago by the enlightened thought and sensitivity of the present. I’m sure people in a hundred years’ time will laugh at our attempts at ascribing value to things we hold dear today but which will be laughable in an age of bionics, interconnectivity and super-technology.

Washington, Adams, Hamilton and Jefferson kept slaves – and yet gave us the Declaration of Independence and birth of modern democracy. Do we throw the baby out with the bathwater and destroy every monument, memorial and building named after them because they did what all men of their time did? I don’t think you’d find one American prepared to start. You can’t cherry pick the qualities of a ‘good’ or ‘bad’ person in a historical sense by using your own or even a modern set of parameters. By those standards, every human prior to at least the 1700s was at best a barbarian and certainly all the greatest men and women of history are nothing but despots and greedy slave-owners.

How are we to claim the Pyramids, The Acropolis, The Forum, the Great Wall of China, and Great Zimbabwe as part of our human story if we pretend they weren’t built by the sweat of slaves and the grinding oppression of the slaveowners? To hide the statues and spare a generation three times removed from the event is to do those sufferers an injustice. If a statue hurts you that much, you’re giving too much power to the statue.

We have an opportunity to build new legacies, create new scholarships, enhance our world and add to a horrible history by making a better future. Where are the new universities Blade Nzimande promised?

This morning I had a Rhodes scholar on my show – Eusebius McKaiser – a man I respect and admire. I like disagreeing with him and I love seeing him debate and deconstruct bad ideas and positions. Though he has an intelligence that doubtless would have come to the fore without it, he is proud to have been a Rhodes scholar. I’m sure he doesn’t have much love for the man who founded the scholarship and didn’t care a damn about his (Eusebius’s) ancestors, but that is immaterial. Perhaps Rhodes left this legacy because he felt guilty? Who knows? All I know is that you can never win an argument by emptying human turds on a statue – and you don’t need to be a Rhodes scholar to figure that out.

This column first appeared on garethcliff.com on 19 March 2015.

Man Up – by Gareth Cliff