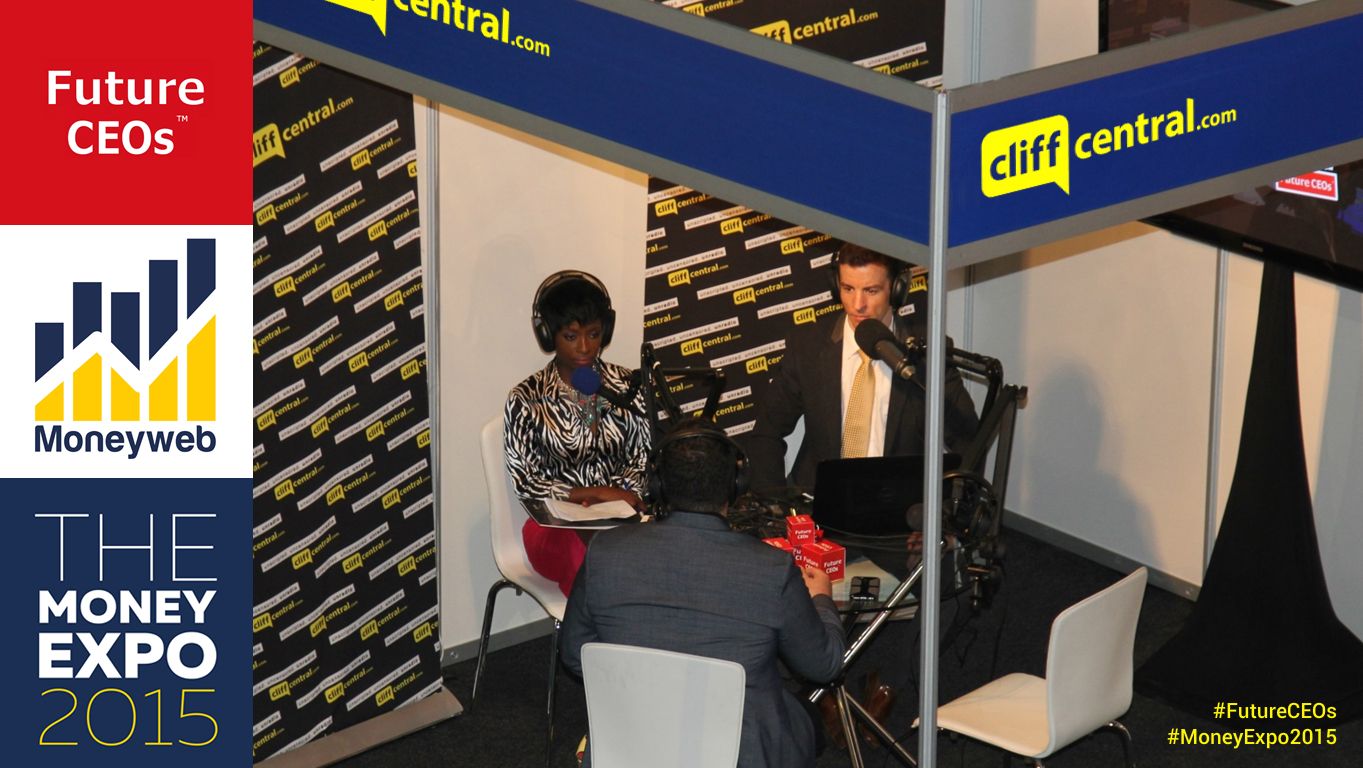 The Future CEOs team, Gareth Armstrong and Hlubi Mboya, were invited to the MoneyWeb MoneyExpo2015 on Friday 21 August.

They chatted to various venture capital and money experts, entrepreneurs and more there (scroll down to listen to the interviews below), and they discussed it further on their live CliffCentral.com show the following week.

What are the biggest money mistakes Future CEOs are making? What would you do if someone invested R1 million rand in your business right now? When is the right time to start investing and what do we invest in? Hlubi and Gareth explore the answers to these and other questions as they discuss their experiences at the MoneyWeb MoneyExpo2015. Listen here for these insights.

Scroll down for more interviews from the event. . .

Hlubi and Gareth talk to Gary about SA’s debt to income ratio, how whether you earn R10 000 or R40 000, both groups don’t seem to have money come the 20th of the month, he explains “Negative wealth”, and more.

The Future CEOs team talk to dynamic duo twin sisters Zandri and Marissa about their entrepreneurial journeys which includes handmaking their products, running a small operation, working in isolation, working after hours, after a full day’s work at their jobs, and they answer our question: “How would you use R1 million if we gave it to you right now?”.

Investing is seen as very complicated, but EasyEquities is changing all this by making it a simple, easy to access process where they allow people to invest as little as R5 in top JSE listed companies and your favourite brands. Hlubi and Gareth talk through this with them.

What in the world is an Exit-Centric Business? Keet Van Zyl empowers Hlubi and Gareth with the understanding that all founders and funders need to have a plan in place to exit their businesses, and the difference between building a business to “flip’ it vs it being exit-centric. Listen closely!

Hlubi and Gareth talk to Matsi about money mistakes entrepreneurs make, how they must expect to make sacrifices to be successful like downgrading their lifestyles for a time, and how investors are cash flush but are looking for good deals.