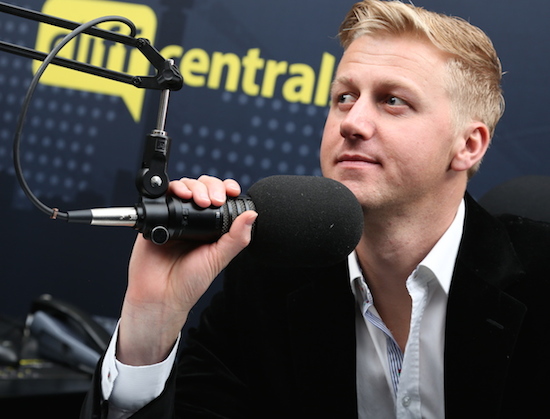 I can’t believe 2014 is over. What a year! I’m sure you do something similar… at the end of every year, I like to take stock – list the things I’m grateful for, the things I want to change in the new year and show some gratitude to those who made the year gone by so good:

1. CliffCentral.com
First off, I’d like to thank everyone who has played a part, been a supporter or made CliffCentral.com such a tremendous little start-up. In 7 months, we have achieved more than I would have believed possible… And that is due to YOU. This year has been more stressful and more rewarding than any other I can remember and I think we’re on the verge of some incredibly exciting new developments in media and advertising, content and talent. To you, our listeners, our staff and our contributors – thank you, thank you, thank you – I can’t say it enough.

2. Thank goodness for the Holidays
I’ve never been so happy to get a few days off – I suspect you might feel the same, but make the most of the break (if you have one) – the last 12 months were pretty insane.

3. e-Tolls are screwed, not us
I’d like to thank SANRAL for being so stupid and imagining we’d comply with their extortion plans. Clearly your toll plans are crumbling and the whole project deserves nothing but doom. I can’t wait to see them dismantle those gantries.

4. Ebola didn’t get us
I’m really very pleased Ebola couldn’t get through our borders – it’s surprising really, considering how many other things do – things like Radovan Krejcir, a million Zimbabweans and Khulubuse Zuma through OR Tambo. Come to think of it, I’m surprised Khulubuse gets through anything at all.

5. Oscar Pistorius behind bars
We spent most of the year thinking, talking and speculating about Oscar Pistorious. And just like that, he’s been moved to the back shelf.  Shows you how short our attention span has become!

6. Nkandla won’t go away
Yes, Gedleyhlekisa, we haven’t forgotten about your big thatched, sprawling estate. Every day you occupy those buildings is a day off your political life – and we can’t wait to turn it into a school for the rural poor of KZN. The firepool will come in handy for washing dirty politicians’ hands of corruption too – at least that’s a better use for it than what Riah Phiyega tried to bullshit us with.

7. Generations is back
We should be glad that at least one TV show still gets ratings on SABC. Even though Ellen Tshabalala and Hlaudi Motsoeneng tried to completely destroy the public broadcaster, they only partially destroyed the nation’s number one soap. You know you’re useless when you can’t even be destructive effectively.

8. The elections weren’t all bad
The ANC is in decline, the EFF is on the rise and the DA are growing too. Our multiparty democracy is growing up – a little bit. We have a long way to go, but we’re no totalitarian regime, despite some attempts to make us one.

9. The lights are on, for now
Eskom seem hell-bent on making themselves the worst business and worst service-provider in history, and so far they’re getting that right. Nonsense about load-shedding and power plants that aren’t working has made us all so distrustful of our national energy supplier that we’re on the verge of lighting fires and giving up on growth and development. I won’t let you win, Eskom. I want to live here and I want things to work. In 2015 I will do whatever it takes to not have to rely on you at all, you assholes.

10. Shrien Dewani isn’t costing us money anymore
Sure, we paid a fortune to get him out here. Sure, our prosecutors let us down. Sure, Anni’s family feels there’s no justice – but at least we sent that snivelling, kinky, lickspittle little man back to England, and we don’t have to think about him anymore. We won’t have to deal with him pretending he’s sick, or depressed, or in danger. He’s gone, and a good riddance it is.

The saddest things about 2014 are that we still don’t know what happened to that Malaysian plane and all its passengers, and that we still haven’t found and rescued those Nigerian girls who were kidnapped by Boko Haram. We’re still worried about Isis – and Pakistani school kids and lunatic religious nut-cases in Sydney coffee shops, but we also know that barbaric, medieval philosophies can’t last much longer.

The future is full of electric cars, positive political change and a generation that want to see things get better. I can’t wait for 2015. I always say that every year should be better than the last – and for me that is true. I hope it was for you – but in case it wasn’t – may the new year bring you an opportunity to start fresh.