CliffCentral… a bright light in a currently dim country 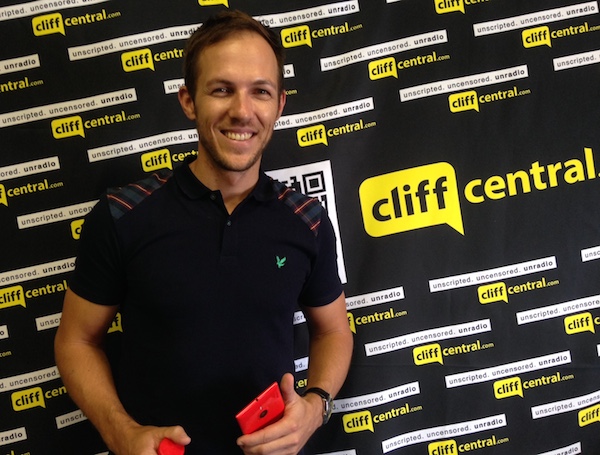 South Africa is not a great place right now. Even the most optimistic and patriotic of individuals (something I consider myself) will confirm this, and signs of things improving anytime soon are hardly obvious.

The recent spate of xenophobic violence in Durban, Johannesburg and their surrounding areas is nothing short of shocking, and provide us with an all too clear reality of how many fundamental problems currently besiege our land and its people.

Winter has also just started, and thanks to Eskom and their years of poor management, we aren’t guaranteed power to keep warm during this rather brutal season. And if we are lucky enough to have this most precious of resources, we are paying a fortune for it!

The petrol price goes up as many unwanted times as Kanye West at an awards ceremony, and the value of the Rand goes down as much as Kesha. Even when you try to make light of all this, it’s still rather depressing.

My weekdays in this troubled country start at 04:45 each morning. It’s a very tough time of day for me… the above elements aside, it is dark and I am mostly exhausted. The thought of leaving a warm bed shared with my girlfriend and a rather content cat is nothing short of torture, but I do it with as much vigour as I can possibly muster.

That is because since July last year, I have been working at CliffCentral.com, a rather special place with some rather special people. If you somehow don’t know what CliffCentral is, arguably the biggest name in South African radio (Gareth Cliff) last year decided that enough was enough at the heavily regulated and limiting national broadcaster. And with balls the size of Nkandla, broke new ground with his own channel.

I get to the studio building around 05:30 each morning. The first person I see is Michael Flax, originally an intern, but now an essential member of the morning team. Somehow always smiling and always energetic at this time of day, Michael makes pretty dreadful coffee, but his genuinely happy demeanour is strangely infectious. 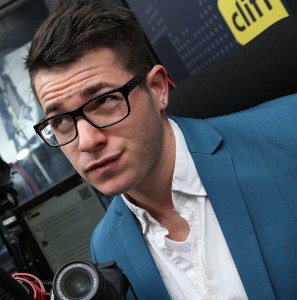 Walking down the short corridor to the studio I pass the control room inhabited by Damon Kalvari. Half man, half a nervous-breakdown-waiting-to-happen, Damon is a fascinating human being, and one that provides terrific perspective on life every day, on every possible element. Life is an endless uphill saga for Damon, something that can initially be proven by the fact the air conditioner in his room is blowing cold air at full blast. He doesn’t like this, but he thinks this is the only function the state-of-the-art machine performs. 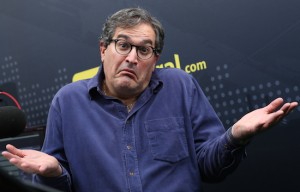 Sitting in the studio, I have 10 minutes by myself where I see if there’s any news I should know about that happened while I was sleeping. There seldom is, so I then just trawl Twitter for entertaining stories or conversation pieces instead.

Already in a better mood than the one I woke up in, Gareth generally arrives at about 5:58AM. Naturally if asked, Gareth will tell you he arrives just after 5:30AM, but in reality he comes in at the time I mentioned, but he’s always in a great mood, and always looking to start the day on a high.

He is without doubt the most inspirational person I have ever met, as no matter what is happening in the outside world – or indeed his personal one – he will greet you with a smile, and look to enjoy a laugh or two before any business needs to be seen to.

In the 120 or so seconds left between “hello” and the start of the show, Gareth uses this time to find a rude song to open the show with, while also trying hard to find the remote for the air conditioner. Damon often hoards all the remotes, because if you are going to misuse something, you may as well do so with every remote possible.

The show starts around 6:02AM, and with that Mabale Moloi walks in. This isn’t the time she arrives of course, she arrives a little earlier and sits in the open area outside the studios. It’s one of her many ways she likes to communicate to others that she doesn’t like them. 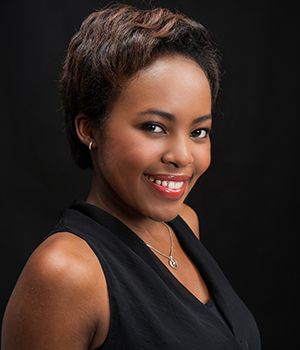 Initial chit-chat started, the show is often a blur most days. I find it’s the fastest way to spend three hours as we cover every possible issue known to man by means of news stories, interactive games and through interesting clips found on the internet. We also interview some of the country’s most well-known and interesting people, and some days, some absolute duds who are nevertheless entertaining in their own way.

Every day is different and special for its own unique reasons, and every day I leave the studio at 9AM feeling that my day hasn’t just gotten off to a good start, but I have become a little more enlightened and interesting as a person. All the elements that make this show what it is rubs off on you eventually, and it’s a pretty good feeling.

Along with the Gareth Cliff morning show, CliffCentral offers original shows from 6AM until 6PM every Monday to Friday. So that means the studio itself is easily one of the most active and truly eclectic places I have ever spent an extended time period in.

To use last Friday as an example, straight after our show is The Khonza Show hosted by Andrew Levy. There isn’t a show like this on radio anywhere, as it tackles any sort of issue from an informed and constructive standpoint. The variety of guests that they have is incredible, and while uncovering some fascinating insights into pressing issues, Andrew does impress on his audience that though white, he is pretty much black. 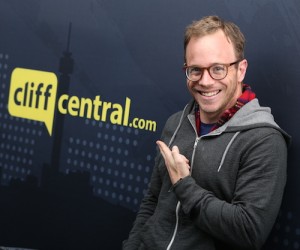 Straight after that is SexTalk with Jonti Searll and Sexy Spyda. When Jonti arrives he brings muffins for everyone in the studio, and while going over his prep, he is always willing to chat to whoever is around about sex and life in general. Jonti has dedicated his life to sex, and teaching people about it, so just about every conversation with him naturally gravitates towards the subject. While trying to write about the SupeRugby fixtures for the weekend, I somehow got into a very interesting chat with him last week about fetish porn. This probably doesn’t happen at your place of work, but it’s a pretty natural thing here. 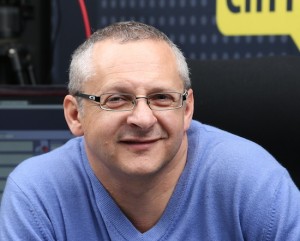 Once Jonti and Spyda get going with their show, Casper de Vries arrives. Now if I were to truly describe Casper as an individual, I would probably spend the rest of the day typing. Never have I met a funnier man, but also a more truly unique one. Casper doesn’t drive, nor has he ever. He doesn’t have a driver’s license, and each week there is a bit of a story as to how he arrives at the studio. The CasperRadio Show runs from 11-1 every Friday, and also showcases the truly incredible cast of stars like Alicia, Simba and Bernard (or Betty if you prefer to use his stage name).

It’s a completely off-the-wall show that is equal measures funny, shocking, scandalous and downright bizarre. From shirtless guys popping by to Casper’s soap opera to learning about foreign languages, it’s audio content that I download weekly.

Then it’s the Blaques with the #BlaqueLife show. Blaque Life magazine has a show starring Monwabisi Tethe, Tumisho Masha and Wilmarie Janse van Rensburg. Now as you may have picked up, Wilmarie isn’t a ‘black’ in a traditional sense, but the Blaque Life show is variety at its finest. It’s one of the many shows that truly defines what CliffCentral is about – showcasing amazing people doing amazing things. Radio used to be so much more than DJs saying things of little substance in between songs and spot breaks, and this is what CliffCentral is bringing back – actual conversations with actual people who are doing actual things of worth in South Africa. 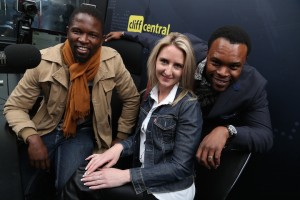 The more you listen, the better you feel about things happening around you.

After the #BlaqueLife show, it’s Oneal on CliffCentral which is a live music show. Oneal is a terrifically talented broadcaster, and his show brings a variety of local musicians to our world each week in the most natural of settings. Music has always been a great reflection on society and what people are doing with it. It’s still such an important form of expression, and through Oneal’s platform, many great up-and-coming artists get to share their stories and original sounds. 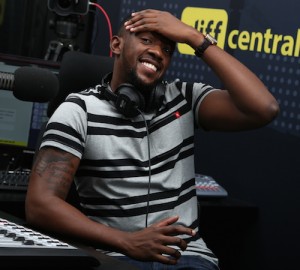 Every day rounds off with the #Kellman on CliffCentral show, hosted by Ayre Kellman. You may not recognise the name right now, but Arye is one of the hardest working men in broadcasting with terrific creativity and drive. Sounds like a clichéd thing to say, but Arye and his crew have become a pillar of CliffCentral from day one. Appealing to a younger audience than the morning show, #Kellman on CliffCentral is three hours of pretty much everything you can think of in pop culture right now, featuring an endless stream of dynamic and influential individuals. 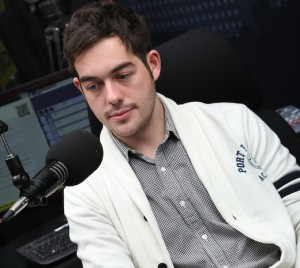 Arye is currently taking some time out over in America and Mexico, so his producer Katlego is holding things together with Michael Flax, Jono Sinclair and Siya Sangweni-Fynn. Three young guys cutting their teeth in broadcasting, the things they are doing, and the confidence they are doing it with makes you feel that this country might not be in such bad shape after all.

So though it may be hard to find genuine positives out there right now, you will certainly find some reasons to be happy and entertained by joining in on the CliffCentral fun. To use last Friday as an example, there was a guy from the Depression and Anxiety society who had won a competition to come and visit the studios and hang out with us. Despite a sombre back-story, he was a really happy guy and fitted in perfectly, chatting to everyone as he went around the studios.

South Africa is still a great country, and it still has much to offer. Listening to CliffCentral each day proves this, and is perhaps the catalyst we all need to get on with things and make sure we only go forward from here.

CliffCentral… a bright light in a currently dim country