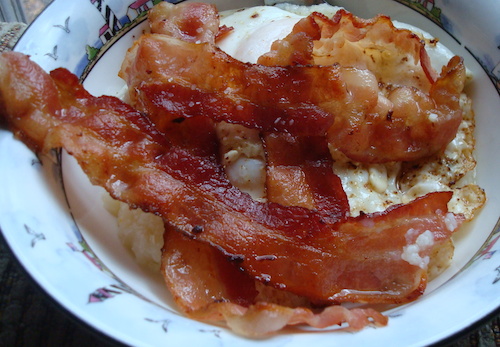 Some people love bacon. A lot. But do you like it enough to worship it?

The United Church of Bacon is, however, about more than simply bowing down to the crispy deliciousness we love to eat for breakfast. And lunch. Sometimes dinner too.

It was actually started as a protest to fight discrimination against atheists.

– We oppose supernatural claims. We are skeptics and atheists. In our religion, we doubt religion.
– We fight discrimination. Atheists are not inferior and should not be hated and marginalized.
– We raise money for charity while accepting no donations for ourselves. We do not claim tax exempt status.
– We perform legal weddings, always for free. How joyful!
– We expose religious privileges as silly by claiming the same rights for Bacon.
– We praise Bacon! If you don’t like pigs, praise Vegetarian Bacon or Turkey Bacon.

They even have 9 Bacon Commandments.